Home – “At the End of Our Streets is Sunrise”

“At the End of Our Streets is Sunrise”

We have certainly been through a dark time in our world, our country, and in our city. And it’s not over, by any means. The continuing upheaval of the pandemic, an ongoing and long overdue racial reckoning, the aftermath of the “me-too” awakening, the exploding reality of the climate crisis—all these and more easily conspire to cast a pall over our collective conscience. And, more locally, San Francisco itself has become a lightning rod for controversy, criticism, and even outright mockery by the national media and especially from arm-chair pundits all over the internet, lampooning the seemingly capricious and bizarre priorities of our School Board, the housing crisis wedded to the crisis of the unhoused, the so-called pandemic exodus, and the larger California-wide problems of an out-of-control cost of living, fires, drought, re-calls, and on and on. How on earth are people of faith expected to worship in such a hostile and unforgiving climate? In Ezekiel, the exiled Israelites put it this way:

“By the rivers of Babylon we sat and wept

when we remembered Zion.

There on the willows we hung our harps,

for there our captors requested a song;

our tormentors demanded songs of joy.”

Many of us experienced a wave of hope as vaccination became widely available and re-opening became a reality, only to see that hope tempered by the disappointment of vaccine hesitancy and the rise of the Delta variant. As the saying goes, “Man plans, God laughs.” Though I don’t think God is laughing at our plans. I think God is weeping right along with us at so many examples of justice denied and hope delayed. And to add to all of that, it’s summer, the time of year when many of us are accustomed to notions of recreation, fun in the sun, easy living, barbeques, outdoor events, gatherings, and so on.  Instead, we live in San Francisco, where more often than not, summer means cold winds and gloomy fog. I for one struggle with this upending of summer norms. I dream of lazing on a sultry beach and am instead offered cold nights by the fire.

Still, our Christian tradition teaches us over and over again that hope and faith can and will lead us through even the darkest of times. And this, friends, is certainly NOT the darkest of times. It may seem like it as we slog through the day-to-day disappointments and frustrations that abound. But even in the face of the very real challenges and tragedies of this time and place, we are better equipped and more privileged than people like us at any other time in history. While we’ve been stuck mostly at home for the past year and a half, we have electricity, refrigerators, food delivery, wi-fi, Zoom meetings, “video church”, YouTube, movies on demand, books on demand, and so much more. From the warmth and comfort of our modern homes, we can’t even conceive of living through a time like this the way our ancestors might have had to do. We are morally obligated to remind ourselves of just how lucky we are. In spite of all the challenges we collectively face, we must not lose sight of how far we’ve come. Let it be said that in our “captivity” we did indeed learn new ways to sing songs of joy.

Our collective hope rolls in and out like the fog flows in and out of the Golden Gate. Our faith urges us to accept that ebb and flow, to embrace it. Summer can be delayed in this city by the bay, but summer does come! “Weeping may tarry for the night, but joy comes with the morning.”

‘The City By the Sea – San Francisco’ by George Sterling

Ever the winds of morning
Are cool from the flashing sea –
Flowing swift from our ocean,
Till the fog-dunes crumble and flee.

Photo by Jesper Christiansen on Unsplash 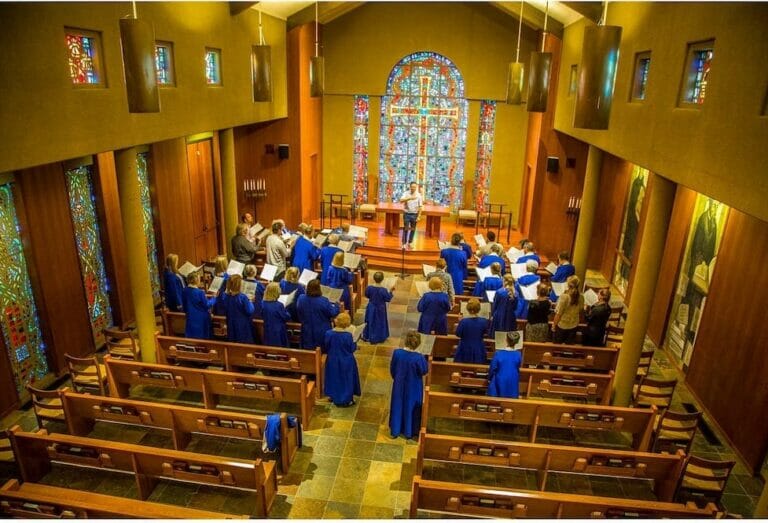 This is the happiest note I have had the pleasure of writing in over a year. We are about to start singing
More