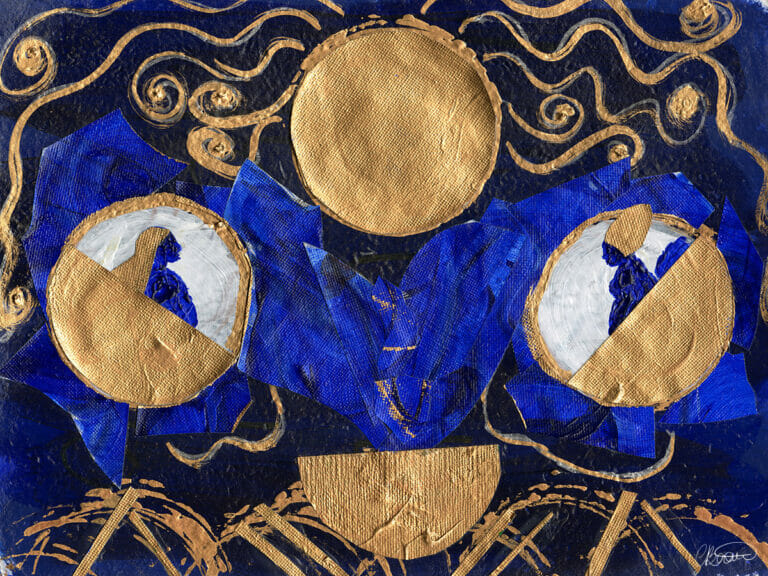 December 18 2022, 10am
After receiving the news from the angel, Mary retreats to her cousin Elizabeth’s house. When Mary arrives (perhaps unannounced), Elizabeth doesn’t just welcome her—she is filled with the Holy Spirit and speaks a blessing upon Mary as her own child leaps and kicks within her womb. She sees how God is at work and names it out loud. In this moment of profound solidarity, Mary and Elizabeth see the divine in one another. This connection inspires Mary to sing her radical hymn of praise, declaring how God’s liberating love remains steadfast throughout the ages. From generation to generation, we can see how God is at work in our relationships. We find God in each other. The way we see the divine in each other impacts how we live and move in the world. When we view every human being as a child of God, we generate a different world.
Weekly Bulletin
Sermon PDF
Stream on Facebook
Stream on YouTube
Watch Sermon
Sermon Text
Weekly Scripture
Watch Sermon
Sermon Text

We heard a few verses from Micah’s prophecy this morning. “From you, O Bethlehem, shall come forth for me one who is to rule in Israel, whose origin is from of old, from ancient of days!”

When Michah‘s audience would have first heard this prophecy, they didn’t know about Jesus. They were likely in exile or just unpacking their suitcases on their return from exile, so the idea of a powerful and useful ruler coming from little Bethlehem would have seemed farfetched.

And probably not very inspiring. We don’t even want to hear such prophecies today. We want to hear about power that will dominate! We want our leaders to come from Big Places and have Big Influence.

What if your prophecy today said, “From you, O Gilroy, shall come forth one who is to rule…”

Nothing against Gilroy, I hear it is a nice place. But it doesn’t really inspire Big Things. It is just a town, where people like you and I live.

But, while we are looking to New York, Paris, Rome, or DC, Micah is desperately trying to get us to refocus our attention in another direction.

He wants us to look for someone who will stand in God’s strength rather than in their own strength, or the strength of weapons, wealth, or influence.

This is Good News because this leader will feed his flock. The people will be secure. He shall be the one of peace.

From little ol’ Bethlehem, the one camel town.

There is no indication that the people who heard Micah’s prophecy paid it much mind. “Yeah, Micah. We’ll see about that. Bethlehem, hah! And I suppose, while we’re making crazy predictions, that this leader will be born to an unwed teenager too. That Micah is a funny guy!”

But that is, of course, exactly how God works.

It is worth remembering. Because even now, 2,000 years later, based on the way we treat unwed pregnant teenagers far from the halls of power, we still seem to be surprised that the son of God would be born in a stable to a teenage mother and not born in the halls of power. We still seem to live as if nothing good could come from little Bethlehem, or Gilroy, for that matter. We still live as if the Divine story is not going to intersect in our own lives.

The author of Luke’s gospel seemed to have believed the prophet Micah. He recognized the leader who would “be the one of peace” in the person of Jesus.

For Luke, the birth of Jesus is both as mundane and every day as a teenager in Nowhereville giving birth AND also as cosmic, earth shattering, game changing as the power of God defeating the powers of this world.

But Mary doesn’t know this quite yet.

Immediately preceding our passage, Mary has gotten some news. The angel has appeared and told her not to be afraid. She’s going to give birth to the son of God.

The angel doesn’t give her the details about how this will all work out, but does tell her that nothing is impossible with God. Which is great, really.

But I wonder what Mary was thinking after the angel left.

What do I tell my parents?

What do I tell my fiancé?

What are people going to say?

Why couldn’t the angel have told everyone about this so it doesn’t depend on people believing me??

And heads to visit her distant cousin Elizabeth. Elizabeth is one of our many barren women in scripture. She is gifted with a late life pregnancy and the child in her womb will be a great prophet. John the baptizer.

It seems that the best place for a pregnant teenager to take stock of her situation is with a barren woman. Mary needed to go to a woman who faced reproductive challenges to appreciate how an unplanned pregnancy could be a gift.

Have you had news like that? I imagine you haven’t had a visit from the angel Gabriel, but have you received news made you stop and really take stock of your situation? When you needed help and weren’t sure where to go?

I was visiting with a woman many years ago who had been diagnosed with breast cancer. After three surgeries, chemotherapy, and radiation therapy, she was beginning to feel that her life was returning to her. But she said that one of the blessings of the past months was how her friends had responded.

She said that life is busy and that we don’t always take the time to spend with the people we love because we get caught up in the routines of our busy-ness. But she said those months had been a blessing because her friends had stopped and taken time to share their gifts with her. In addition to the practical gifts of meals and care for her young children while she was facing treatment, they also gave of their very specific gifts. A wigmaker made her a wig. A calligrapher painted some inspiring words on her wall. An herbalist made her a batch of healing herbs. She spoke of how powerful those gifts were to her, and how they had mattered as much, if not more, than the chemo, because these people who loved her stopped and took time to give her something intended just for her.

I thought back to this conversation after my mom died. The cards, flowers, gifts, and calls I received after her death were the gift I didn’t know I needed, until I received them.

And it made me think of Mary and Elizabeth, giving each other particular gifts that nobody else could give in quite the same way. Mary’s visit must have given comfort to a woman who had been in seclusion. And Elizabeth’s child leapt within her womb and she gave Mary a blessing—blessed are you among women, and blessed is the fruit of your womb.

Think how powerful that blessing would have seemed to Mary—to have the message of the angel confirmed by a real person she knew and could trust.

Between the two of them, Elizabeth and Mary, bearers of both the Messenger and the Message, they were able to support each other in ways that other people could not. Older formerly barren woman and younger unwed pregnant teenager—able to celebrate together over pregnancies they knew were miraculous, no matter what others might end up saying.

Mary’s reply, Mary’s gift, to Elizabeth’s blessing is a prayer, a hymn, a poem of thanksgiving, promise and justice. We call it the Magnificat. And it isn’t just a gift for Elizabeth, or just a prayer for Mary. This is a prayer for all of creation—from generation to generation. After stopping to take stock of her situation, to meet with Elizabeth and get some perspective, Mary seems to live into the cosmic nature of her reality.

“My soul magnifies the Lord and my spirit rejoices in God my savior for God has looked with favor on the lowliness of his servant!”

She goes on to describe the great things that God has done for her.

God has scattered the proud.

God has brought the powerful down from their thrones.

God has lifted up the lowly and filled the hungry with good things.

Her prophecy is even stronger and, perhaps, even stranger than Micah’s. Because, of course, we know that the proud have not yet been scattered. The powerful are still on their thrones. The lowly are still low and the hungry have not yet been filled.

Mary puts her prophecy in present tense, not future tense.

Maybe because she sees the future becoming the present in the reality that God has chosen her to bear God’s own son, the Messiah. Mary’s song proclaims the very reality and promise that she embodies.[1]

Mary and Elizabeth remind us that we are called to focus on these big, cosmic, prophetic changes in the smallest, simplest ways. To think of ways to overturn corrupt systems is good work, but sometimes exhausting, and can leave us in despair. And while we work for that, we can offer the more immediate gifts of love. We can offer welcome and shelter to someone in need. Each of us can be the person that someone thinks of when they wonder “who can I call to share this insane news of my life?”

It’s in those seemingly little moments that we recognize the world we want to create.

At this point in the story, he got a little emotional and said, “Oh, and I feel I’m home.”

He then continued, with his hands cupping his face: “Where grown men call strangers ‘love’. I think if we all did that, it would be a rather better place wouldn’t it?

“And when people have got problems with gender, and pronouns, and so on, ‘love’ covers everyone really. Just call everyone ‘love.’

On Love Sunday, we’re reminded that we can see God in each other when we see each other with love.

As we move toward Christmas, may Mary’s song be a reminder to us that the reality inaugurated in a birth in a stable in Nowhereville, Judea is still in process. We are called to sing her song and to live our lives showing we believe it to be true. If God would choose to be born to a teenage mother in the backwater of Judea, what more might God have in store for us? May the Advent, the Coming, of God turn our lives and our world upside down so that Mary’s song may be true for all.

Where you going to, Love?

39 At that time Mary got ready and hurried to a town in the hill country of Judea, 40 where she entered Zechariah’s home and greeted Elizabeth. 41 When Elizabeth heard Mary’s greeting, the baby leaped in her womb, and Elizabeth was filled with the Holy Spirit. 42 In a loud voice she exclaimed: “Blessed are you among women, and blessed is the child you will bear! 43 But why am I so favored, that the mother of my Lord should come to me? 44 As soon as the sound of your greeting reached my ears, the baby in my womb leaped for joy. 45 Blessed is she who has believed that the Lord would fulfill his promises to her!”