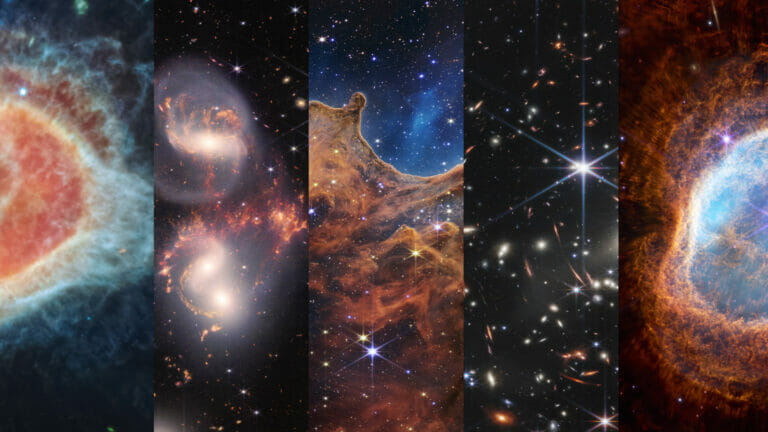 The Prayer of Fulfillment: August 28, 10AM

August 28 2022, 10am
Each week in The Lord's Prayer, we pray "For thine is the kingdom, and the power, and the glory forever, Amen". How do we know that God is indeed sovereign? If everything is from God and belongs to God, what is our role as human beings on earth?
Weekly Bulletin
Sermon PDF
Stream on Facebook
Stream on YouTube
Watch Sermon
Sermon Text
Weekly Scripture
Watch Sermon
Sermon Text

Today’s scripture passage from Psalm 24 tells us of a God who created all things and to whom all things belong.

“The earth is the Lord’s and all that is in it.
The world and those who live in it.”

We belong to God; all of creation belongs to God; this earth, this amazing universe pictured on our bulletin and captured by the James Webb Telescope, all belong to God.

Now, I think most of the congregation isn’t familiar with the opening hymn we sang today: “Earth and All Stars.” (Thanks to all of you for trudging through it together (it’s good to try new things!) and special thanks to Michael for making it come alive on an instrument that is more complicated than I can even imagine.)

I first learned of this hymn while serving a church in Minnesota. It was written for the 90th anniversary of St. Olaf College, a school in Minnesota where many of those in my former church community had attended.

Its lyrics are quirky, to say the least. I’ve never sung of test tubes and labs, athletes and the band in worship before. But I kind of love it for all that it includes. After all, the earth is the Lord’s and all that is in it. It captures Psalm 24 in a unique kind of way.

And our gospel lesson for today is rich. It includes the beatitudes, and being salt and light. But today, I want to focus on what Jesus says in verse 17:

Through the beatitudes, Jesus sets the stage for what the kingdom of heaven is like, ultimately turning on its head what most people considered a “blessed” life, and reinterpreting scripture as well as societal norms.

And then he says, unironically, that he has come to fulfill all these things.

Today, when we pray, “For thine is the kingdom and the power and the glory forever, Amen,” it is a statement of faith that the fulfillment of God’s kingdom has already walked this earth in the person of Jesus Christ.

Through the life, death, and resurrection of Jesus, all is fulfilled—complete, fully carried out, done and done. We are redeemed, and the world is redeemed. It has already happened.

But the world in which we live still looks a long way off from the kingdom of heaven that Jesus spoke of. And the promises built into the beatitudes don’t yet seem completely fulfilled at all.

I don’t have to give you a rundown of why. You’ve seen the news. Your heart must ache like mine does.

My kindergartner told me this week about practicing lockdown drills at school.

She identified places in the school and her classroom where she could hide in case of an active shooter. She explained to me that if she’s hiding in the bathroom, she has to get real low to the ground because the bathroom has windows up top.

I just hate that this is our reality; a sure sign of the brokenness in the world.

And that’s just one of the things that grieved my heart this week.

The Message Translation is a paraphrase of The Bible using more common language for our times, written by Eugene Peterson. And it translates “For thine is the kingdom, and the power, and the glory forever, Amen”. as this:

“You’re in charge! You can do anything you want! You ablaze in beauty!
Yes. Yes. Yes. Amen.”

I want to affirm this. And I want to believe that God is indeed sovereign, and that it is God’s kingdom that ultimately rules this earth and no other earthly power can defeat it. But if Christ has already done it, if it is already fulfilled, why is the world the way that it is?

Now, I don’t have all the answers; in fact, I may have zero answers. But I do know that in Christian theology, there is a word called Parousia.

It is found often in the letters of Paul, and usually we just use it to mean the Second Coming of Christ. The actual translation of the Greek, however, is presence or arrival.

In the early 20th Century, Princeton theologian Gerhardus Vos began tying the idea of parousia to a state of “already but not yet.” God’s kingdom is already here, among us, within us, being built all around us, but also not yet complete. He asserted that we are actively taking part in the kingdom of God right now, although the kingdom will not reach its full expression until sometime in the future when Christ returns.

We are “already” in the kingdom, but we do “not yet” see it in its full glory. This kingdom, or as some prefer to say kin-dom (as in family – kin), is described in Scripture both as a realm already and presently entered and as one we shall enter in the future.

It is both/and. That is the tension in which we now live as followers of Jesus.

And I believe our role, as the church, the Body of Christ, is to continue doing the work of Jesus, to usher in God’s kin-dom, so that all may have life and have it abundantly in this world, not just the next.

I remember having a conversation with Rabbi Jessica Zimmerman-Graf who is the head rabbi at our neighbor synagogue, Congregation Sherith Israel. We were talking about the concept of messiah, and how that relates to why we work for justice in the world today as people of faith.

She told me that as a reform Jew, she is still awaiting the first coming of the messiah. And one of the reasons our Jewish siblings participate in Tikkun Olam which means “repairing the world,” is so that the world will be more ready and prepared for the messiah to come.

In contrast, for Christians, we believe the Messiah has already come. And we participate in repairing the world and making it a better place in order to be more like that messiah, Jesus the Christ, who preached an upside down, radical gospel message that proclaims:

Our two faith traditions come at it from two very different understandings of the Messiah. But the work before us is the same:

to nourish those who are hungry;

to care for those who are in need;

to be the reason someone believes that there is a God who loves them.

And I think when and where interfaith dialogue can flourish, when and where different faith traditions can serve alongside each other for the good of the greater community, (even if the why we do it might be different), that is a glimpse of the kingdom of heaven already on earth here today—it is a fulfillment of the promises made in scripture.

So where have you glimpsed God’s reign here on earth this week? How have you noticed the kingdom of God among us already?

Perhaps the kingdom of God is like the jubilee of student debts being forgiven.

Perhaps the kingdom of God is like six high school football players in Rome, Georgia, rescuing a stranger from her totaled vehicle and saving her life as a result.

Perhaps the kingdom of God is like over 800 guns being turned in at a recent Gun Buy Back event in (get this) Houston, Texas to make the city just a little safer.

Friends, the kingdom of God is at hand; in fact, it is already here. AND we are to help usher it in to fulfillment.

That is the tension; the pull of The Lord’s Prayer, that is both done and still needs completion.

This tension reminds me of a quote by Francis Weller who once said:

“The work of the mature person is to carry grief in one hand and gratitude in the other and to be stretched large by them. How much sorrow can I hold? That’s how much gratitude I can give. If I carry only grief, I’ll bend toward cynicism and despair. If I have only gratitude, I’ll become saccharine and won’t develop much compassion for other people’s suffering. Grief keeps the heart fluid and soft, which helps make compassion possible.”

We, as people of faith, grieve when we see how far we are from God’s intention for the world. But we can also be grateful for how God’s kingdom is already at hand in this world. We are pulled, stretched, challenged, and moved to action by this holy paradox.

So we pray: “For thine is the kingdom, the power, and the glory, forever—“and how do we end it all? Amen.

Amen. Its meaning is so simple; it just means “so be it.” The basic meaning of the Semitic root from which it is derived is “firm,” “fixed,” or “sure,” like, “it’s gonna happen. And the related Hebrew verb also means “to be reliable” and “to be trusted.” In the English, we sometimes see it translated as “verily,” or “truly.”

Amen is a declaration, an agreement and affirmation for what’s being said, but it is also a statement of faith that what’s been said will and can come to pass.

So friends, practice your amens. Amen?

Allow your amen to give you hope and faith as we pray at least weekly this radical prayer that Jesus taught us.

Thanks be to God – AMEN.

Psalm 24
The earth is the Lord’s and all that is in it, the world, and those who live in it;
for God has founded it on the seas, and established it on the rivers.
Who shall ascend the hill of the Lord? And who shall stand in his holy place?
Those who have clean hands and pure hearts, who do not lift up their souls to what is false, and do not swear deceitfully.
They will receive blessing from the Lord, and vindication from the God of their salvation.
Such is the company of those who seek him, who seek the face of the God of Jacob. Selah