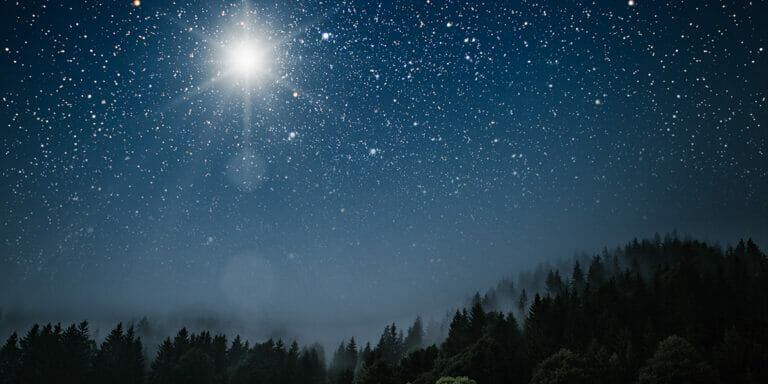 January 2 2022, 10am
Today is Epiphany, when we celebrate that the magi followed a star that led them to Jesus. What light are we shining in the world that leads people to know the love of God? Today in worship we will receive 'star words' in worship. Each star has a different word on it, and you're invited to take one and let that word guide you this year, bringing you closer to God.
Weekly Bulletin
Sermon PDF
Stream on Facebook
Stream on YouTube
Watch Sermon
Sermon Text
Weekly Scripture
Watch Sermon
Sermon Text

Today we are celebrating Epiphany. This is an ancient Christian celebration, dating at least as far back as the 300’s. Epiphany is one of my favorite days in the year of church life.

This word comes to us almost directly from the Greek.

Epiphany means to reveal. When someone has an epiphany, something that was muddled has become clear. In church language, the Epiphany is God being revealed to us.

Epiphany is when the church marks the arrival of the magi to see Jesus, when God was first revealed to gentile wise ones, but for those of you paying attention, you may have noticed there was zero mention of the magi in John’s gospel reading this morning.

The wise ones only show up in Jesus’ story in the book of Matthew. And in the Narrative Lectionary, from which our preaching texts are taken this year, we will be reading John’s gospel until Easter.

So today, instead of picturing the wise ones on camels with their gifts, we’ll explore John’s epiphany story, the beginning of Jesus’ ministry, when John the baptizer tells us he has come to testify to the light.

Before we get to that, I want to start with a disclaimer of sorts. This gospel is one of my favorite books in the whole Bible. It has beautiful and poetic language and imagery. It also has some language that can be problematic. It is a book of dualism. There is good and bad, in a cosmic sense. Good guys and bad guys, in terms of people who support Jesus followers or who oppose them. There is language of light and dark. The light shines in the darkness and the darkness has not overcome it.

When we hear light and dark language in this gospel, we should be mindful of the ways our culture associates “light” with goodness and “darkness” with badness. We’re warned away from the dark side, in Star Wars, for example. The bad guys in Westerns wore black cowboy hats and the Lone Ranger was dressed in white.

This language and imagery can perpetuate racist stereotypes, where dark skin becomes something to be feared and whiteness is not. But we do not live in a world with 24 hours of daylight. We live in a world where we need both light and darkness for life to flourish. The dualism of John’s gospel does not need to limit our experience.

So, we use the language in John’s gospel with awareness and with the intent for God to be revealed through the frailties of human language, even as we are aware that language functions for us on a subconscious level and we don’t always understand meaning and intent clearly.

I’m realizing that what started out as a side note about language in John’s gospel is actually an illustration of Epiphany, or how God is made clearer to us in this story. Because we need language to communicate. And God’s language is still something we need help in translating.

I saw the new West Side Story this week, and it is lovely.

I mean, it’s still a Romeo and Juliet tragedy, but the music and dancing are great. And in this remake, Spielberg made the choice not to translate the Spanish dialogue into English. Which meant the star crossed lovers, Tony and Maria, are not always speaking the same language.

There are bigger differences they try to bridge than just spoken language, of course, but I think I appreciate the choice Spielberg made to leave the translating undone. Because we are often speaking different languages and it takes effort to seek understanding.

The Word became flesh and lived among us.

By introducing us to Jesus as Word, or Logos in the Greek, John cues us in that his story about Jesus of Nazareth will be different than others you have read. It will be a cosmic tale—what is translated as “world” in English is actually “the cosmos”.

The story of God is bigger than the chapters that are about us.

The Word was in the beginning.

The Word was there when the foundation of the world was being laid and God spoke creation into being.

At the same time, the story of Jesus is exactly about us.

When we were lost in translation, separated from God—the Word became flesh and moved into the neighborhood.

Jesus, the baby born in Bethlehem is the closest translation of the scriptures, and of God’s language, we’re going to get.

On Epiphany, it means that Jesus himself is what reveals God to us  in ways we didn’t have before. And our call is to do what we can to point toward Jesus when we see people having divine translation issues.

It must have been an interesting experience to be John the Baptizer. To know something about Jesus that others couldn’t yet see, and then spend his ministry translating and preparing the way for others to know Jesus too.

There’s a famous painting from the 1500’s by Mattias Grunewald called the Isenheim Altarpiece. And one of its scenes is of Jesus on the cross. Standing next to him in witness is John the Baptist, who is not usually painted at the crucifixion scene because he had already been killed by Herod well before Jesus was killed. In this scene, John is there at the cross, pointing to Jesus.

The model of the biblical witness in his unity of form is John the Baptist, who stands so notably at midpoint between the Old Testament and the New, between the prophets and the apostles … In this connection one might recall John the Baptist in Grünewald’s Crucifixion, especially his prodigious index finger.  Could anyone point away from himself more impressively and completely? (Church Dogmatics I/1, p. 112.)

There’s something humbling about the reminder that our faith and testimony is not about us, and shouldn’t point to us.

We don’t testify to the light so we can bring more people to our church, or so people can know that our faith is so great that lots of people admire us.

South African Anglican Archbishop Desmond Tutu died the day after Christmas. Archbishop Tutu helped lead South Africa through a process of Truth and Reconciliation after the fall of Apartheid. He was laid to rest yesterday and a clergy friend said this about him. Listen to her words:

“He was one of those rare people who seemed to see what God could see, knew what God knew, loved the way God loves. The loss of one who so consistently was able to help the world to see what it could be, who inspired people to be who God created them to be, and who generously shared an expansive and unconditional love of all God’s people is a profound loss. We have lost one of God’s dreamers. A dreamer who ably helped us see God’s healing, transformation, and redemption in ourselves, in others, and in the world.” Bishop Carlye J Hughes

Her description of him reminds me of John the Baptist, pointing away from self and toward God. Tutu once said:

“A person is a person through other persons. None of us comes into the world fully formed. We would not know how to think, or walk, or speak, or behave as human beings unless we learned it from other human beings. We need other human beings in order to be human. I am because other people are.”

On Epiphany, we’re reminded of our call to point to God in a way that helps us all not just be better Christians, although that’s important too, but to be better humans. Where did we learn to be human? As Tutu asks. We learn it from seeing others model it. And sometimes that breaks down and people learn violent and destructive ways of being too.

Where did we learn to be Christians? Not a single one of us learned it in isolation. We learned it because along the way, someone testified to the light. We learned it in transcendent music, hearing the stories of scripture come alive in worship or in Sunday School. We saw people pointing toward God with their very lives of service, advocacy, compassion, and justice. We learned what it is to follow Jesus by listening to fellow Christians sharing their stories of struggles, survival, grace, and gratitude.

There are lots of ways to testify to the Light. Sometimes words are useful. Sometimes the way we translate God’s grace and truth through our actions is enough for people to hear more clearly what God is speaking through the person of Jesus.

God’s Word to the world is ultimately a word that is with us and for us, in the midst of our mess, bold and brave enough to experience the joys, the pains, the mundane and the sublime, right alongside us. When we place ourselves right alongside of people who are suffering, people in need, people being persecuted, our lives begin to speak God’s language. Let’s go and testify to the light.

He was in the world, and the world came into being through him; yet the world did not know him. He came to what was his own, and his own people did not accept him. But to all who received him, who believed in his name, he gave power to become children of God, who were born, not of blood or of the will of the flesh or of the will of man, but of God.

And the Word became flesh and lived among us, and we have seen his glory, the glory as of a father’s only son, full of grace and truth.