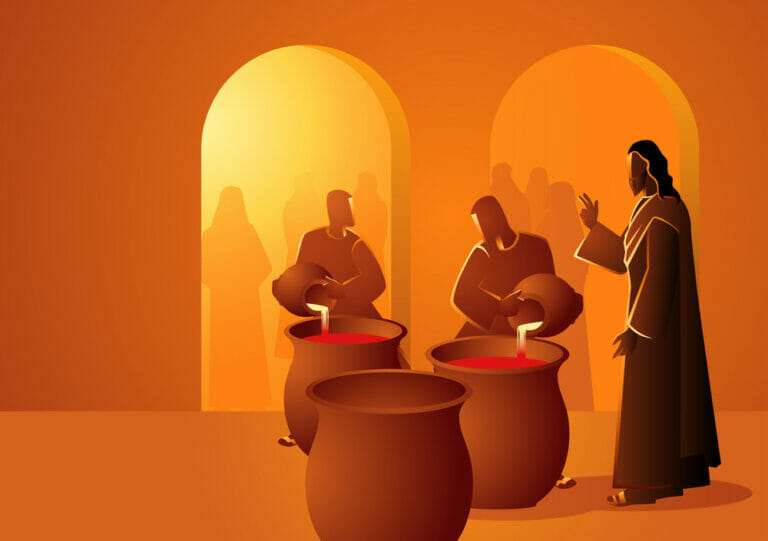 January 23 2022, 10am
In this story, Jesus performs his first miracle. It is a sign of abundance that borders on “too much”---more than we expect, and more than we know what to do with.  For this abundance to happen, Jesus needed someone to tell him his time had come. And he didn’t really want to hear the news. How do we know when our time has come? Are we listening for the voices that may, even now, be calling us into our purpose?
Weekly Bulletin
Sermon PDF
Stream on Facebook
Stream on YouTube
Watch Sermon
Sermon Text
Weekly Scripture
Watch Sermon
Sermon Text

As you maybe have already discerned from our readings the past few weeks, John’s Gospel handles the story of Jesus differently than do Matthew, Mark, and Luke. Those three are called the “synoptic” gospels because of the way they see Jesus through the same general lens. Synoptic.

Jesus sort of floats six inches off the ground with the light of God shining all around him in this book. He’s mystical and says things in answer to questions that are in no way an answer to the questions.

And miracles occur in this gospel, but they are more often called signs. And their purpose is to reveal his glory, to point to Jesus, just like John the Baptist does at the beginning of the book. Through Jesus’ signs, we learn about who he is, who God is, and how we are called to live in this world.

Jesus did this, the first of his signs in Cana of Galilee, and revealed his glory, and his disciples believed in him.

Because of this sign, his disciples’ faith and understanding in him was deepened.

But you know who believed in him before the sign?

We don’t hear any stories in this gospel about an angel coming to Mary, the way Luke tells us, leading to the Magnificat. We don’t know how she came to belief and understanding about who her son was, but when the wine goes out at the wedding, she knew who could solve the problem.

Woman, my hour has not yet come.

Only if you’re the son of God, maybe—maybe— you can get away with calling your mother ‘woman’. I’m never not going to be entirely okay with this interaction between Jesus and his mother.

But it may be helpful to remember that in John’s gospel, these stories of Jesus are told in an archetypal way, which means the people in them are individuals AND they are characters who stand in for the rest of us.

By calling her woman, instead of ‘mom’, or even Mary, we’re reminded that Jesus goes back to the beginning of the world when God created woman and man. She may be the mother of God, but he was the one who was there when the world was created.

The other time his mother shows up in this gospel is at the end of Jesus’ life when he’s at the cross, about to die:

She will be restored as mother by the end of the story, when his hour has finally come.

But he seems to want to debate her about whether his hour has come when he’s at a party and presumably about to join his friends on the dance floor.

‘Woman, what concern is that to you and to me? My hour has not yet come.’

I like to picture the interaction between Jesus and his mom. What does this have to do with us, he asks her and can’t you just picture her giving him a long, slow, silent look before she turns to the servants and says “do whatever he tells you”. And then she goes back to the party and joins a conga line, confident that the matter is handled.

He may not be ready for his hour to come. Maybe he had grander plans for the revealing of his glory that would lead people to believe differently in God.

But he watches her walk away, turns to the servants, and gets busy being the son of God.

Even the Jesus of John’s Gospel—the Jesus who was there at the beginning of time—needs someone to call him to his purpose, to remind him his time has come.

I also can imagine how it might have been easier for Mary to stay silent. She could go buy another bottle of wine when she left the party. She wasn’t going to go thirsty. And was she really ready for what would happen when Jesus worked his first public sign? She’s the mother of God’s son, and I guarantee there was a thought in the back of her mind that had a mother’s worry for what that was going to mean for him. She may or may not have known crucifixion was at the end of the story, but she had to have known it wasn’t going to be the easy path for him to stand in opposition to religious and political rulers.

She’s sitting at the party, overhearing the servants comment, “pour slowly, that’s all we’ve got”, and I can imagine her thinking, “Jesus can take care of this…But maybe his first sign is supposed to be something else? It’s not my job, how am I supposed to know what God wants him to do? Would his first sign be a party? Shouldn’t it be something bigger? Like overthrowing the Romans? Maybe I should just be quiet and trust that he’ll do the right thing when it’s time for him to begin his ministry. What difference could my voice make, anyway?”

Woman, what concern is that to you and me?

Mary realized that calling people to their purpose was her concern.

This week, I invite you to listen for the voices we aren’t hearing, those who have been told to be quiet. They may be telling us our time has come. They may be calling out gifts we didn’t think we were ready to use.

And then think about the times you thought about speaking—and then decided it wasn’t your business, or you weren’t qualified to speak about it, or what could one voice matter in such a big mess.

What if Mary hadn’t spoken? What if she had not instructed the servants to do what Jesus instructed? Woman, what concern is that to you and me?

It’s such a seductive lie—to be told ‘this isn’t your problem’.

I think it to myself in all sorts of situations. Systemic racism. Homelessness. The assault on women’s reproductive rights and health. The just way to vote in the school board recall election.

Woman, what concern is that to you and me?

Mary’s actions here remind us that it is our concern when we see things that could be changed, that could make the world better for other people, that could reveal God’s goodness and glory to the world.

We might think that not having wine isn’t that big of a deal. Is it really what we’d want Jesus’ first miracle to be? Run to BevMo and get more, right? Is this where his hour comes?

But hospitality is key in that culture and his mother recognized the potential—the revealing of who Jesus is with a miracle that shows the world to trust in the abundance of God.

Six stone water jars would have held 150 gallons of wine. This is a cup-runneth-over kind of miracle that was going to create logistical problems. Where do you store that left over wine when you need to use your water jars again? All your Tupperware containers and the bath tub?

We look at our proverbial wine bottles and see them as nearly empty—there couldn’t be “enough” to share. There might be one more glass in that bottle for me, but I couldn’t possibly have enough to share with you; or with someone from another country who is seeking to build a better life, or maybe just a safe life, in our country; or with the unhoused person sleeping on our steps; or even with someone who votes differently than we do.

The scarcity of ‘not enough’ makes us forget our connectedness, as we start excluding people from the proverbial wine tasting. And it makes us forget the goodness of God, who has provided for us in the past, has brought us to this moment, and who surely is dreaming right this very minute for our flourishing and provision.

Do we at Calvary trust we have enough?

I could show you bank statements and membership numbers. I could give you all kinds of data to prove we have enough. But unless we trust that God is with us and for us, the data wouldn’t sway you.

Do we, at Calvary, trust we have enough? To do what God has for us to do? To make a difference in the lives of people in our neighborhood?

Because our hour has come.

For Jesus and his mother, they were in a situation where an absence of beverages would be seen as a failure of the demands of hospitality. The story could have ended with Jesus saying, “it’s not my problem. I’ve got plenty of wine, what do I care if they didn’t plan ahead?”

Jesus had a choice to make when his mother called him to his purpose. We too, are faced with choices about how to view, share, steward the resources we have.

Nelson Mandela is quoted as saying. “May your choices reflect your hopes, not your fears”.

I’m thankful for Mary’s voice calling Jesus to live abundantly into his identity, trusting in her hopes for him, and setting aside any potential fears about what it might mean for him to be a public Son of God. I’m thankful he heard her voice, even if maybe he didn’t want to hear it. I’m thankful that they both, in their own ways, made choices that reflected their hopes and not their fears.

Attend to the moments when voices ring out, when they are silenced, when they call us to be who God is dreaming us to be, and when they lead us into an abundance we can’t even imagine.

Thanks be to God. Amen.

On the third day there was a wedding in Cana of Galilee, and the mother of Jesus was there. 2 Jesus and his disciples had also been invited to the wedding. 3 When the wine gave out, the mother of Jesus said to him, “They have no wine.” 4 And Jesus said to her, “Woman, what concern is that to you and to me? My hour has not yet come.” 5 His mother said to the servants, “Do whatever he tells you.” 6 Now standing there were six stone water jars for the Jewish rites of purification, each holding twenty or thirty gallons. 7 Jesus said to them, “Fill the jars with water.” And they filled them up to the brim. 8 He said to them, “Now draw some out, and take it to the chief steward.” So they took it. 9 When the steward tasted the water that had become wine, and did not know where it came from (though the servants who had drawn the water knew), the steward called the bridegroom 10 and said to him, “Everyone serves the good wine first, and then the inferior wine after the guests have become drunk. But you have kept the good wine until now.” 11 Jesus did this, the first of his signs, in Cana of Galilee, and revealed his glory; and his disciples believed in him.