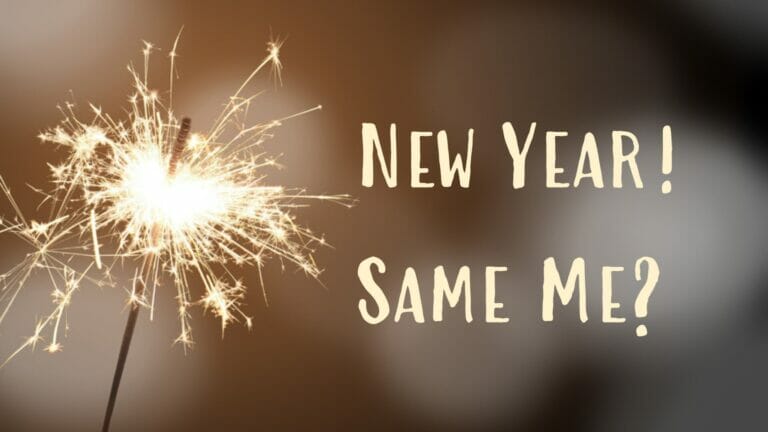 December 25 2022, 10am
Welcome to the season where the commercials are full of invitations to join gyms, weight loss programs, and other helpful ways to be organized and better in the new year. Studies show that as many as 80% of resolutions have been abandoned by February. In worship this New Year's Day, we won't expect anyone to make any resolutions, but we will consider what it is to be made new in Christ. Join us as we welcome in a New Year with our same old selves.
Weekly Bulletin
Sermon PDF
Stream on Facebook
Stream on YouTube
Live Stream
Sermon Text
Weekly Scripture
Live Stream
Sermon Text

How many of you are people who like to make resolutions at the New Year? Anyone want to call out their resolutions?

A number of years ago, I got weary of not lasting past January 18 with my new me resolutions. I wasn’t losing weight. I hadn’t climbed Everest. I hadn’t met George Clooney. What are resolutions even for?

So, I decided to resolve life giving things, rather than punitive things, or rather than hard to manage things.

I resolved to eat more avocado one year. I was wildly successful with that one!

Once I resolved to try new foods, new recipes, and new restaurants—because you know how easy it is to get in a rut, and for the excitement of TACO TUESDAY to become “oh great, mom. Tacos again. How original.”

I try to resolve to do things that will connect me with people.
To write more handwritten notes and letters.

To use my phone as a phone and actually call someone on it to say hi.

To travel to see people I love and don’t see as often as I’d like.

Or I resolve to say “yes” when people invite me to do things—because you know how sometimes it is easier to say “no” because we’re tired or we don’t want to put outside clothes on again today. I rarely regret saying yes, almost never. And I certainly have regretted saying no and missing out.

I also used to be the person who would enthusiastically jump into a new year and declare, “this is going to be the best year yet!” And then there was that year when my candidate lost a big election and the guy we elected was terrible, and then there was that year when the world fell apart with covid and then that kept on longer than we thought (still happening) and so now I’m more like “let’s just quietly sneak into this new year. Nobody make a sudden noise. Don’t touch anything. Walk in slow and quiet.”

And I want to be clear, because the ads for gyms and weight loss programs will give you a different message, you are, right now, worthy of love and acceptance, as you are. You do not need to adopt a single resolution to be worthy of love. Have a resolution if you want to, but don’t think anyone will love some idealized future version of you more than we love you right now.

And of course, it’s arbitrary for us to declare January 1 is new or different than December 31. Time flows on, seemingly unaware of the way we try to limit or name it, like “Tuesday”, or “7 pm” or 2023. The struggles, joys, hopes, and fears we have carried through last year will be there for us today, in a new year, if we choose them again.

And so, I’d like to differentiate what we declare new and what God declares new.

Do not remember the former things,
or consider the things of old.
I am about to do a new thing;
now it springs forth, do you not perceive it?

The prophet Isaiah tells us not to remember the former things, or to consider the things of old. Only new things for Isaiah! But before we look at the new things, we should notice that Isaiah doesn’t completely follow his own advice. Because the first part of our text involves a lot of remembering and considering. “Thus says the Lord who makes a way in the sea, a path in the mighty waters, who brings out chariot and horse, army and warrior….”

This is the same God, in other words, who ushered the people of Israel through the parted waters of the Red Sea, delivering them from Egypt, saving them from slavery. Don’t forget it.

So, before we NOT remember or consider the things of old, let’s make sure we have done just that. Because it is the past instances of deliverance that will call us to believe and trust and remember that it will happen again. The God who stopped Pharaoh, the God who freed a people from slavery and delivered them to the Promised Land is still speaking to God’s people today. And still has plans to deliver and redeem God’s people.

But do not remember the former things, or consider the things of old. Because deliverance will not be the same. Don’t go stand at the side of the Red Sea, waiting for the waters to part. Because they won’t.

Any further deliverance is going to be a very different kind of exodus.

In other words, “while I am the God who saved you once, that is no longer going to be the story you tell people. When you talk about your God, you will tell a new story.”

So you can consider the old things only as they remind you to have hope for the new things.

Do you not perceive it?

This is a NEW THING.

God tells us, “I am the one who can put water in the desert. I am the one who will make the path for you. A path where no path has been before. Even the ostriches and jackals will honor the Lord.”

Whatever this New Thing will be, you can’t even conceive of it on your own. And you don’t get to determine how the story will play out.

Some of us hear this announcement of a new thing and say, “Great! Where do I sign up?” For some of us, the past is something we would gladly leave behind for a new opportunity.

But some of us are looking for more details. “Okay, God. Before I sign up for this journey, I need you to be specific. The jackals and ostriches are interesting and all, but I don’t quite know how that applies to me and I need some more information. I’ve got some control issues.”

We are people who want to see the future before we get there. And if the past has been good to us, if we are perfectly comfortable in the present, why would we want to leave it behind for something unknown and new? God’s message of a new thing is not always a welcome message to comfortable people.

The people hearing Isaiah’s words aren’t sitting in comfort on January 1, pondering a new year, though. They are in the midst of the consequences of some of their bad political and religious choices. Destruction. Exile. Loss. Devastation.

Earlier in the book of Isaiah, the prophet had tried to steer the people away from making those bad choices by warning them of the wasteland they would create. In chapter 34, he writes of what shall happen to Israel:

Thorns shall grow over its strongholds,
nettles and thistles in its fortresses.
It shall be the haunt of jackals,

an abode for ostriches.

So, the Jackals and Ostriches that appear in today’s text in chapter 43 are not entirely new. But they are being re-assigned their role in the story.

As one of the commentators says about this text:

“The prophet projected a vivid image of chaos: jackals and ostriches prowling amidst the ruins of a world collapsed under the weight of the iniquity of its inhabitants. To portray the radical nature of the new thing that God purposes, … Isaiah reintroduces the jackals and ostriches, this time themselves restored to beauty and wholeness and giving honor to their Creator! Even they have taken their place in a world abiding in shalom, a world in which God tenderly cares for the people whom God has chosen, a world – and now we come to the culminating act that gathers all creation up into one common purpose – in which Israel by its very existence bears witness to the one reason that gives eternal value to life: so that they might declare my praise.” [1]

Whatever plans we make for the new year, in other words, are of a different scale to what plans God is making. We are invited to join in the work God is doing. We are invited to be witnesses of what God is doing, where the jackals and ostriches that prowl the ruins can become, in the faithfulness of God, the markers of a new creation. We are invited to trust that whatever new thing God is preparing and dreaming for us, no matter how unfathomable, is better than trusting only our own gumption and resolve.

What do we want to resolve for the year that is to come?

One year I saw a cartoon where one character asked their friend, “why are you so optimistic about this new year? What do you think it will bring? Everything seems so messed up.”

The friend replied, “I think it will bring flowers.”

“Because I am planting flowers.”

Maybe our resolution is in there. We listen for where God is speaking in our world and in our hearts. And then we plant, and welcome, and care for, and seek justice, and love one another.

God is creating a new thing. We get to be a part of it. Happy New Year!

A Letter to the Exiles

29 This is the text of the letter that the prophet Jeremiah sent from Jerusalem to the surviving elders among the exiles and to the priests, the prophets and all the other people Nebuchadnezzar had carried into exile from Jerusalem to Babylon. 2 (This was after King Jehoiachin and the queen mother, the court officials and the leaders of Judah and Jerusalem, the skilled workers and the artisans had gone into exile from Jerusalem.) 3 He entrusted the letter to Elasah son of Shaphan and to Gemariah son of Hilkiah, whom Zedekiah king of Judah sent to King Nebuchadnezzar in Babylon. It said:

4 This is what the Lord Almighty, the God of Israel, says to all those I carried into exile from Jerusalem to Babylon: 5 “Build houses and settle down; plant gardens and eat what they produce. 6 Marry and have sons and daughters; find wives for your sons and give your daughters in marriage, so that they too may have sons and daughters. Increase in number there; do not decrease. 7 Also, seek the peace and prosperity of the city to which I have carried you into exile. Pray to the Lord for it, because if it prospers, you too will prosper.”