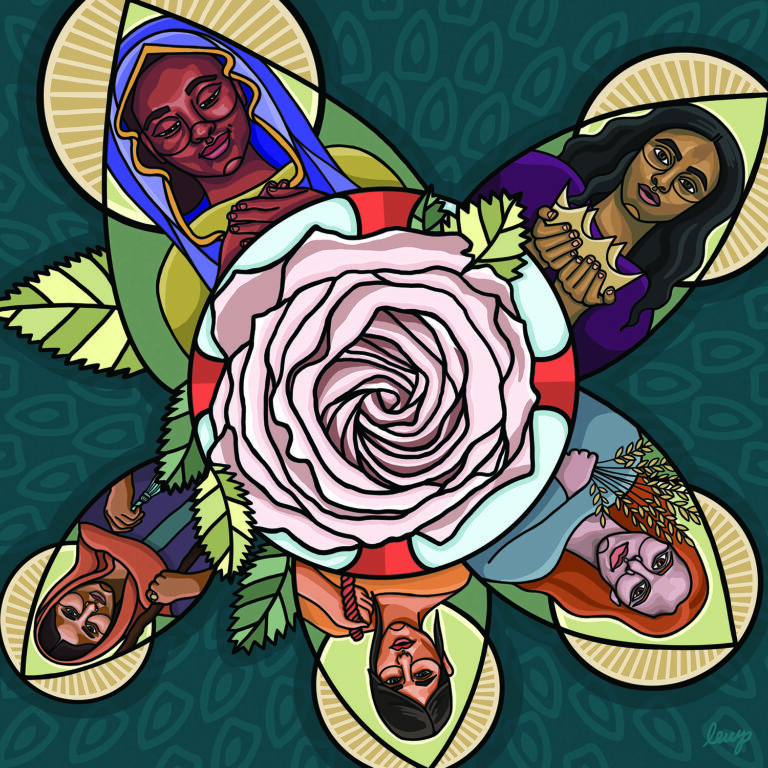 From Generation to Generation: November 27 at 10 am

November 27 2022, 10am
In the long list of names found in Matthew's genealogy, we remember the trauma and triumph of those who came before. Each name holds a story and their story gives way to Christ’s story. God works through the unexpected people and stories of the past and present. We are all woven together into a larger tapestry. Come join us for worship on this first Sunday of Advent as we begin our journey to Bethlehem!
Weekly Bulletin
Sermon PDF
Stream on Facebook
Stream on YouTube
Watch Sermon
Sermon Text
Weekly Scripture
Watch Sermon
Sermon Text

Today, we begin the Advent season by lighting the candle of hope. Advent is a time when we prepare our hearts and our lives for the birth of Jesus. And this year, we are doing so through the lens of our theme “From Generation to Generation.”

As we look back at generations past, surely, there are glimmers of hope in each and every person who has come before us. There’s a quote by Linda Hogan that is circulated regularly on All Saint’s Day, and it says:
“Suddenly, all my ancestors are behind me. ‘Be still,’ they say. ‘Watch and listen. You are the result of the love of thousands.’”

Indeed, thousands of people had to have enough hope to invest in new life, your life. This includes the aunties and the uncles, the step-families, birth families, adoptive families, and the teachers and mentors who also gave of themselves for us.

As we consider what it means for God to be born into this world, it seems fitting to take a look back, and to take a moment to share in the hope of our biblical ancestors who awaited the coming of a messiah.

Last year, the Women of Calvary Bible Study Book was entitled “What My Grandmothers Taught Me: Learning from the Women in Matthew’s Genealogy of Jesus.” It was a fascinating study, that lifted up the five women listed in our passage from Matthew:

Now, ordinarily, women would not be listed in a genealogy. In a patriarchal society, the lineage was traced through the men, not the women, and oftentimes, women would be left out altogether. But here we have this grand opening to the Gospel of Matthew, and these five women are included in this genealogy.

They bring with them stories that are surprising, and sometimes shocking, often full of scandal and even disrepute. These stories leave us to wonder, how did a prostitute, a foreigner, a woman pretending to be a prostitute, a survivor of sexual violence, and an unwed pregnant teenager end up as ancestors of Jesus?

I’d encourage you to look up these women’s stories in the Bible, but here’s a quick summary:

So how are these the matriarchs of our faith? They hardly seem to be the model examples of how women were expected to behave in ancient Israel.

I suppose if nothing else, it goes to prove that old saying, “well-behaved women seldom make history.” In fact, these stories would be proof that misbehaved and misfit women often end up a part of Jesus’s family!

The number 14 (twice of 7) could represent wholeness or completion, though it is important to note that many names (some pretty awful kings and many of the matriarchs, in particular) are omitted from this list. But the inclusion of these women, especially, shows the great vastness of stories represented here—stories of trauma, triumph, hardship, and beauty.

Merryl Blair writes: The women in Matthew’s genealogy all stepped into uncomfortable spaces and put themselves at some risk to ensure the survival, not so much of themselves, but of their families. Even though they are not all Gentiles, none of them started with any power. They all used their quick-wittedness to make the best of difficult situations. Strength of character underlies their ability to survive threatened disgrace.

And all of this complexity is what leads to Christ’s story. Indeed, Matthew’s genealogy is perplexing and problematic in many ways. But this is where God chooses to show up.

It could be argued, in fact, that it is exactly in the messiness of our lives where God shows up. Jesus, after all, was born, not in some sanitized hospital room, but in a manger, among the mess of animals and weary parents who had traveled a long distance. And birth, I can assure you, is messy business.

Like a tapestry woven throughout time, the Christmas story weaves us in – to remember how God has shown up in the past, to continue the work of collective liberation, and to behold the presence of God in flesh and bone through that newborn Christ child.

So, what have our grandmothers taught us?

For me, Christianity was introduced to both sides of my family through my grandmothers. My friend the Rev. Kurt Esslinger was here on November 6, and he shared about the Korean peninsula and its complicated relationship with the United States. My grandmothers became Christians because of the work of some of those American missionaries.

I have included their pictures on our “From Generation to Generation” loom that will sit in the Atrium this season. You are invited to add your own pictures of your family’s many generations on this loom throughout Advent.

For my dad’s mom, she was educated by Presbyterians in a time when not many girls were allowed to go to school. And there she learned about God’s love and chose to become a Christian.

And for my mom’s mom, she had access to healthcare because of the presence of missionaries that then saved the life of one of her children. This caused her to convert to Presbyterianism and bring her entire family to church every Sunday.

And yet, these missionaries who were kind enough to build schools and hospitals for “the Koreans,” also held strongly to the xenophobic idea of “orientalism,” the belief that those who lived in Korea and neighboring countries were humans but somehow less than those from the west.

I have had to work hard to try and not perpetuate the often-unrealized, but deeply-internalized racism that my parents and grandparents held due to generations of being told, explicitly and implicitly, that they as Koreans are not as good as the white Americans who came to “save them from themselves.”

I stand on the shoulders of those who have come before me. And there is work to do, so that that I do not pass on some of that colonized mentality.

Our histories, the generations that have come before us – it’s messy.

And while we are the product of our ancestors, we are not bound to repeat their mistakes. Because with each new generation, there is an opportunity for new life, new traditions, new ways of being that can be birthed.

The Isaiah passage illustrates a convergence of opposing groups and identities coming together. The prophet declares: “They shall beat their swords into plowshares, and their spears into pruning hooks; nation shall not lift up sword against nation, neither shall they learn war any more.”

Instead of the way of the past—of war—they must learn a new way by transforming their weapons into gardening tools. Elder Don Bear writes a lovely reflection about this in Calvary’s Advent Devotional written by members and staff of this congregation. I hope you’ll pick one up today, or it’s also available online.

So, what are the old paths that we’ve followed, and where must we diverge into a new way?

If new generations are like gardens, who are the spiritual elders in our community who planted the seeds for the things that are now blooming? And what seeds are we planting for the future?

Adam Grant once wrote, “Too many people spend their lives being dutiful descendants instead of good ancestors. The responsibility of each generation is not to please their predecessors. It’s to improve things for their offspring. It’s more important to make your children proud than your parents proud.”

Now this applies not to just those of us with children, but to all of us who are raising up the next generation of those who will come after us. And that’s all of us because a church community, at each baptism, we commit to helping raise that child in faith.

So each and every one of us, regardless of our marital or parental status, has a responsibility to those who come after us.

So don’t just be a dutiful descendant to those who have come before; be an awesome ancestor to those who will follow us. After all, our lives, histories, actions, and stories are interconnected and woven together.

And the work of God is always unfolding—in and through us, through this generation and the next.

This Advent, may we all remember that we belong to a story etched into the wrinkles of time, to generations that have come before and will come after, to a love that won’t let us go, and a hope that prevails no matter how messy it gets.

Throughout this Advent season, let’s take a closer look at how the Christmas story unfolds. Let’s pay attention to each of the characters in these familiar narratives and ask:

What did each person pass on or contribute?

How did they either participate in God’s liberation and love, or try to thwart God’s justice?

What can we learn from them? What is our role now?

And what will we pass on to the next generation?

May hope light our way through this Advent. Thanks be to God, Amen.

Isaiah 2:1-5
The word that Isaiah son of Amoz saw concerning Judah and Jerusalem. In days to come the mountain of the Lord’s house shall be established as the highest of the mountains, and shall be raised above the hills; all the nations shall stream to it. Many peoples shall come and say, “Come, let us go up to the mountain of the Lord, to the house of the God of Jacob; that he may teach us his ways and that we may walk in his paths.” For out of Zion shall go forth instruction, and the word of the Lord from Jerusalem. He shall judge between the nations, and shall arbitrate for many peoples; they shall beat their swords into plowshares, and their spears into pruning hooks; nation shall not lift up sword against nation, neither shall they learn war any more. O house of Jacob, come, let us walk in the light of the Lord!