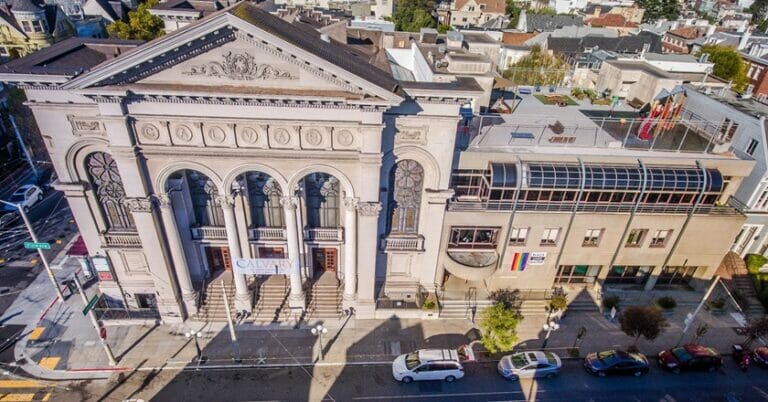 On Sunday, April 26, 2020, we, as San Franciscans, had been sheltering in place for 40 days.
I was on maternity leave with a seven-week-old and hadn’t really left our home for most of that time.

I chose to tune into worship that Sunday, even though I was on leave because it was Facebook anyway and easily accessible, and, frankly, I just needed to connect with something beyond myself.

Michael Conley, our Director for Music Ministries, had taken it upon himself to put together Calvary’s Sunday worship videos. And in this particular one, as the prelude began, he recorded a walk that began up near Alta Plaza Park, came down Jackson Street, past Calvary’s chapel windows to Fillmore Street. He recorded the outside of the church, then took us through those old wooden doors and into the sanctuary, still decorated for Easter.

Maybe some of you remember this video. And maybe some of you, like me, shed a few tears. There was something about taking this walk together through Michael’s phone lens
that just felt so profound and compelling in that moment.

It was a walk that I knew so well, a walk so familiar, a walk I had taken multiples a week, but that I was no longer supposed to take while sheltering in place.

Michael, I want to thank you for that recording that so many of us needed to feel connected, not just to one another but to this building which is sacred and holy as a place of worship.

See, buildings are often more than just buildings, aren’t they? They are symbols. And buildings that house worship often serve as symbols of hope, of peace, of God’s presence and grandeur. The mere presence of a church can point us outwards and upwards towards something beyond ourselves.

In fact, the forebearers of this church loved this building so much, they moved it brick by brick to this location. Calvary has not always stood on Jackson and Fillmore, it has moved several times,
but the stone and the pews and so much more that makes up this building is original.

“[it is] clear that we human beings need the symbols … to remind us that the present reality of our own immediate experience, especially if it is less than ideal, is not the end of the matter!
The symbols become a way to enact, not just the grace experienced in the past, but the possibilities of the future arising from God’s grace … [they] provide the center from which we are able to fulfill our mission in the world,” end quote.

And Solomon’s father, King David, was able to house the ark in a temporary tabernacle, but it is King Solomon who finally finishes the Temple in all its glory. And today’s scripture reading is Solomon’s dedication of that Temple,
the ribbon-cutting if you will.

Now, part of how we know this Temple was so sacred to the Israelites is by the way they mourn it when it is destroyed. This is the First Temple, before the Babylonian exile.

And even when they return from exile and are rebuilding the Temple, there is an understanding and a sadness that the Second Temple will never match the glory of the first.

You see, Solomon really went all out, spared no expense to really get it right. And the Temple’s presence reminded Israel that they were God’s people, that they were called to more than just their own lives and their own well-being.

Now, there might have been some legacy and ego needs for Solomon as well, and I’m sure many could argue that the wealth spent on building this could have been used differently, but this Temple was ultimately not for Solomon but for God.

And it was a reminder that we bring our first fruits to God, not our leftovers, that God is worthy of the very best in our lives. Its glory transcended everyday life, allowing the people to bask in God’s goodness and love.

The ornate details of the Temple remind me of the early artisans who built and designed churches in Europe. It is said that these builders would sometimes carve beautiful statues and figures that would be placed inside the church’s walls and crevices and rafters where no one would ever even see them.

Hidden, these little treasures existed purely for the sake of beauty, not to be fawned over by admirers, but hidden away, given solely to God, great craftsmanship offered only to Our Maker.

So, buildings are more than just brick and mortar. They are symbols that help us feel safe, that give us hope, that connect us with one another and with God. They are symbols of God’s presence among us. These symbols: the sanctuaries, the chapels, the stained glass, they remind us that we are co-creators with God in this world that thirsts and aches for a different paradigm.

In fact, just in our own community, through our online worship, we reach people in Georgia, Alabama, Canada, Turkey, and all over the world! It’s amazing who we connect with beyond these walls, some of whom have never even stepped foot inside this building.

The truth is God cannot be contained. And the Spirit of God blows where it wills.

Even Solomon who put so much time and resources into that first Temple knew this. He asks, “But will God indeed dwell on the earth? Even heaven and the highest heaven cannot contain you, much less this house that I have built!”

And that’s a good thing, too. Because buildings are not permanent. Like everything on earth, they do not and cannot last forever.

We know that Solomon’s Temple is eventually destroyed by the Babylonian king Nebuchadnezzar. And even the Second Temple which was built to replace the first falls eventually to the Romans.

Here in California, fires and earthquakes heart wrenchingly remind us of the impermanence of so much we hold dear. And while we will do what we can to be good stewards of this building,
it, too, is not permanent, even if it has survived so much already. And it would behoove us to hold it lightly.

After all, God is not in the building. God is out there, wild and free in the world.

And God is in here, in each and every one of us. We are created in the image of God; we bear the imago dei, not any sanctuary or church building or Temple, but humankind.

Wherever there are God’s people, God is there. What makes God present in this church is not the pews or the stained glass, but each and every one of you.

Likewise, God is present in each and every person we encounter outside of these walls.

Our friends who sleep on our steps, God dwells in them.

Prostituted women and sex workers, those who are on or struggling with mental illness or drug addiction on the streets, God dwells in them.

Children separated from loved ones at the border; Afghan refugees seeking asylum; Haitian families whose homes have crumbled; God dwells in them.

And first and foremost, we must rebuild people not buildings.

We are a living sanctuary in which God dwells.

Growing up, I used to sing this song in youth group, maybe some of you know it:

Lord prepare me, to be a sanctuary, pure and holy, tried and true.
With thanksgiving, I’ll be a living sanctuary for you.

God dwells, not in places, but in people.

St. Augustine once said, “God gave us people to love and things to use, and sin, in short, is the confusion of these two things.”

We honor God; we worship God when we love one another, when we honor the image of God in others, not just with our words but with our actions and our very lives.

God gave us people to love and things to use.

But Lillian Daniel, an author and pastor in Illinois, who sometimes rubs people the wrong way, once said in an interview, “Any idiot can find God alone in the sunset. It takes a certain maturity to find God in the person sitting next to you in the pew who not only voted for the wrong political party but has a baby who is crying while you’re trying to listen to the sermon.”

We are called to love people, all God’s people because they bear the image of God, because God chooses to love us.

And so in our own ministry here at Calvary, in how we live out our Christian faith, as both individuals and as a community, we must prioritize people over property; humanity over our handiwork; and being a blessing over preserving buildings.

Now, that’s not to say one cannot mutually benefit the other. It doesn’t have to be either/or.

Our houses of worship should not be a museum or a mausoleum or a monument to God,
but first and foremost spaces that serve God’s people, the community, and the neighborhood.

And now with coronavirus cases on the rise yet again, we must creatively imagine how we can be God’s people not in a building, but quite literally, outdoors.

Back in 2010, the Detroit Symphony Orchestra began talks about how and when to close.
With Detroit’s crumbling economy, supporting something like an orchestra was no easy task.

But when conversations first began to emerge about costs and feasibility, the Music Director at that time, Leonard Slatkin, rather than stopping or giving up or pausing performances, decided to just keep on playing.

The future was uncertain, especially of the building, but that wasn’t going to stop him. He took the music out of Orchestra Hall and went into the communities of Detroit to play for those who may have never heard an orchestra play before.

Rather than charging money to raise those much-needed funds, the concerts were free to the public. Slatkin said, “In these difficult times, bringing music to a larger public is more important than ever.  The Detroit Symphony Orchestra is committed to expanding its audience, and it is my hope that as we reach out to different constituencies, they in turn will come to visit us as well.” [1]

Although they were faced with their own problems and insecurities, the DSO chose to go out and take music and beauty into the broken lives of others.  They took their talents, and in a small but significant way, brought about a better Detroit.

We must take the music, the beauty of the gospel message out to the people, and perhaps one day, they’ll come and visit the space from whence it originated.

Or maybe they won’t. But they will have been touched and moved by God’s love and beauty nonetheless. And maybe that’s enough.

So, go. Go and be God’s living sanctuary in the world, a conduit for God’s unconditional love.

Be a home, a refuge, a shelter for others, knowing that God dwells within each and every person, and we will forever be changed by providing sanctuary for one another.