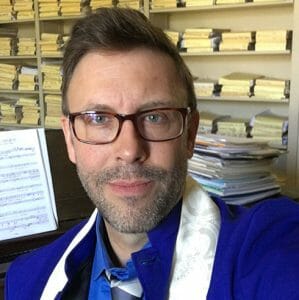 Michael Conley has earned a notable reputation in the United States and abroad for his multifaceted career as conductor, pianist, organist, singer, and composer.  The New York Times has said of his work, “first-rate conducting,” and of his compositions, “tuneful,” “handsome,” “ambitious,” “piquant,” and “surprising.”  After two decades in New York City, for the past six years he has been the Director of Music Ministries at Calvary where he oversees an active and diverse music program. Over the course of his three decades in music ministry he has had the great privilege of serving a wide array of churches representing numerous denominations and a great diversity of geographical locales and cultural and spiritual traditions.

Prior to coming to San Francisco, for 15 seasons he was the Artistic Director of the West Village Chorale, in Greenwich Village, Manhattan, for eight seasons the Artistic Director of the Hudson Chorale in Westchester, NY, and for five years the Assistant Conductor of the Collegiate Chorale, founded by Robert Shaw. For almost a decade he was the Music Director at Judson Memorial Church on Washington Square in Manhattan, and for four years was the Assistant Director of Music at Saint Ignatius Loyola Church on Manhattan’s Upper East Side. For nine years he directed the High School Choir at the prestigious Dalton School. He has led choirs and orchestras on numerous international tours, including performances in Italy, Austria, Hungary, the Czech Republic, Germany, Croatia, Greece, Switzerland, and Spain.

As a singer, Mr. Conley has been a soloist with The Gregg Smith Singers, The Dessoff Choirs, the Woodstock Fringe Festival, with the professional chamber chorus Manhattan Voices, The Collegiate Chorale, and was a singer/conductor/composer member of the award-winning contemporary music ensemble C4: The Choral Composer/Conductor Collective.  He holds an undergraduate degree in Composition from James Madison University in Virginia, and completed his graduate studies at Westminster Choir College, where he was a student of renowned conductor Joseph Flummerfelt. Mr. Conley is a published composer and has written numerous works in a range of mediums from chorus, orchestra, and chamber ensemble to hymns, cabaret songs, and musicals.